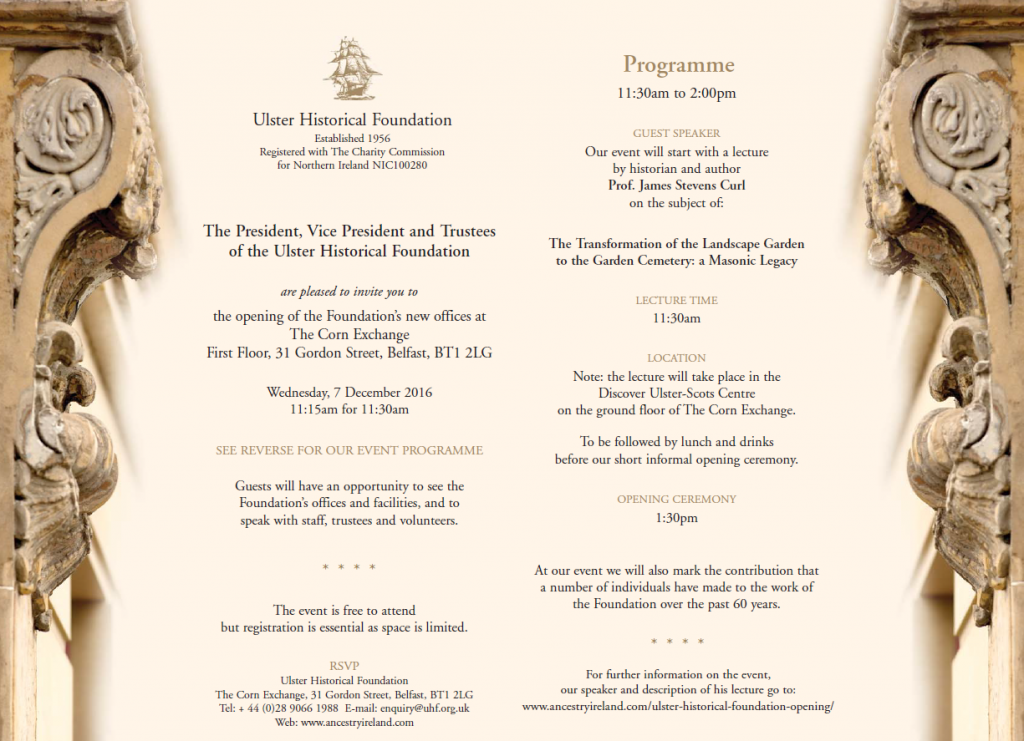 The President, Vice President and Trustees of the Ulster Historical Foundation

are pleased to invite you to
the opening of the Foundation’s new offices at:
The Corn Exchange
First Floor, 31 Gordon Street, Belfast, BT1 2LG
Wednesday, 7 December 2016
11:15am for 11:30am

Guests will have the opportunity to see our new office and facilities and to speak with our staff, trustees, volunteers and researchers. In addition we will use the occasion to mark the incredible contribution a number of individuals have made to the work of the Foundation during the past 60 years.

How to register for the event

It is very important to the Foundation that our Guild members and friends can participate in this great event as your support made our move possible. Our opening event is free to attend but registration is essential as space is limited.

For those of you wishing to join us on 7th December please let us know as soon as possible by emailing: enquiry@uhf.org.uk

Our event will start with a lecture by historian and author Prof. James Stevens Curl on the subject of:
"The Transformation of the Landscape Garden to the Garden Cemetery: a Masonic Legacy" before our opening ceremony.

Professor James Stevens Curl has held Chairs in Architectural History at three Universities, and is currently Visiting Professor at the University of Ulster. He read for his Doctorate at University College London, and has twice been Visiting Fellow at Peterhouse, University of Cambridge. He is a Member of the Royal Irish Academy, a Fellow of the Societies of Antiquaries of London and of Scotland, a Fellow of the Royal Incorporation of Architects in Scotland, a Member of the Royal Institute of the Architects of Ireland, and a Member of the Royal Institute of British Architects. He has established his credentials as an historian of Freemasonry with two books: The Art and Architecture of Freemasonry; An Introductory Study (1991—which won the Sir Banister Fletcher Award as Best Book of the Year in 1992), and Freemasonry & the Enlightenment: Architecture, Symbols, & Influences (2011). His various papers published in AQC and other outlets have helped to establish his scholarly credentials in the field. His Oxford Dictionary of Architecture, with contributions on landscape architecture by Susan Wilson, was published to widespread acclaim by Oxford University Press in 2015 and 2016.

Details of Professor Stevens Curl’s other publications may be found on his website: www.jamesstevenscurl.com

Conditions in urban burial-grounds in the eighteenth century were unpleasant, not least through overcrowding, yet despite powerful arguments to improve matters, very little happened until the effects of Edward Young’s Night Thoughts began to filter through European sensibilities in the second half of that century, leading to the gradual transformation of the elegiac landscape-garden into the garden-cemetery. Professor Stevens Curl will outline this important aspect of the potty-training of Urban Man, demonstrating the role Freemasonry played in a phenomenon without which no nineteenth-century city could properly function.

About the Ulster Historical Foundation

Ulster Historical Foundation exists to help individuals, families and communities around the world trace and share their Irish and Scots-Irish history and to broaden their understanding of and interest in the rich  history of the province of Ulster. In pursuit of this goal we provide a range of activities, including: genealogical and historical research services, book publishing, hosting history events and delivering community education programmes. Established in 1956 the Foundation is a registered charity and self-sustaining not-for-profit organisation.