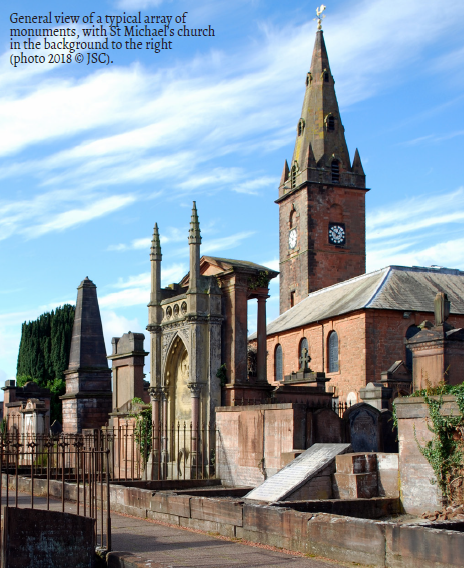 Subscriptions are invited to raise sufficient funds so that this important project can be realised.

The burial-ground attached to St Michael’s and South parish church, Dumfries, in south-west Scotland, has existed as a place of interment for at least a millennium. Of extraordinarily high density—probably containing no fewer than eighty thousand burials—it is embellished with an amazing array of funerary monuments and tombstones, some of superb architectural quality, and many of astonishing size and grandeur considering the relatively small area it occupies. It also houses the handsome Classical mausoleum of Scotland’s national poet, Robert Burns (1759-96), virtually a contemporary of his fellow-Freemason, Wolfgang Amadeus Mozart (1756-91). In terms of its scale and architectural character, St Michael’s Kirkyard is unique among provincial churchyards within the United Kingdom: this book describes its historical importance and aesthetic qualities, illustrating some of its finest monuments, and drawing on a remarkable cache of original architectural drawings.

FOLLOWING THE SUCCESS of the Nerfl Press’s handsome facsimile edition of J. C. Loudon’s great book on Cemeteries, published in 2019, it is proposed to bring out another volume, also a Limited, Numbered Edition, casebound, with almost 60 illustrations, many in colour, all produced to a very high standard, designed, printed, and bound by the same team which produced the Loudon tome. It will be indexed by Auriol Griffith-Jones, have a Foreword by the expert on monuments and memorials, Roger Bowdler, and an Epilogue by the debunker of Rosslyn mythology, Robert L. D. Cooper.

James Stevens Curl has studied funerary architecture and landscapes for some 64 years: among his published works are The Victorian Celebration of Death (1972 and 2004), A Celebration of Death (1980), Funerary Monuments & Memorials in St Patrick’s Cathedral, Armagh (2013), and studies of funerary monuments by Sir Francis Chantrey and others. He contributed to, and edited, the major study of the General Cemetery of All Souls, Kensal Green, London (2001).

Subscriptions must be received by me no later than 1 November 2020. The cost per copy will be £40.00 to include postage and packing within the United Kingdom only. For postage outside the UK please add £10.00, and for postage outside Europe please add £20.00. Copies will be sent out to subscribers as soon as the book is available, estimated as February 2021. After 1 November the price per copy will be £60.00, so subscribers will get a fine copy at less than cost.

Contact the author, Professor James Stevens Curl, to express your interest in subscribing and information on how to do so.