Browse: Home > The Shared Inheritance of Ulster and North America

The Shared Inheritance of Ulster and North America 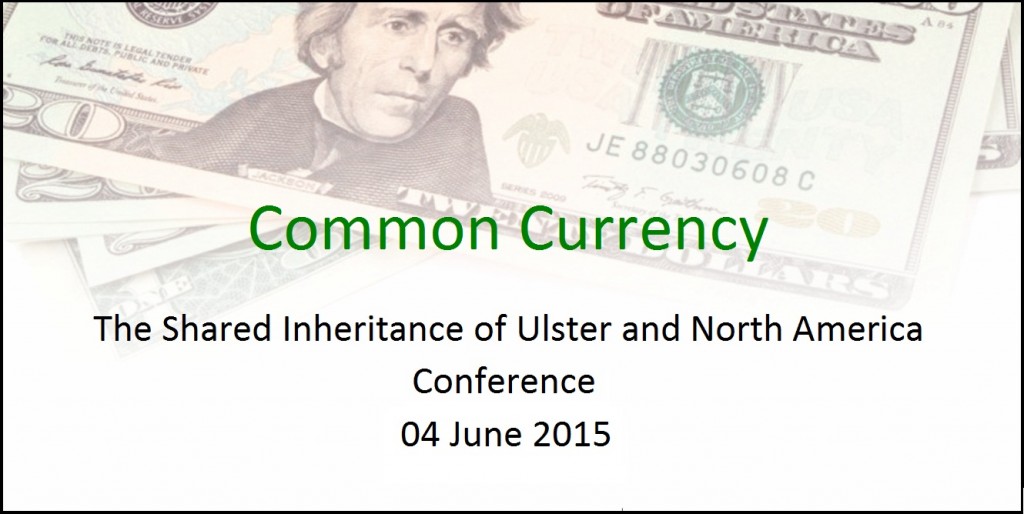 Common Currency is a one day conference aimed at anyone with an interest in the deep and myriad connections between Ulster and North America across a broad range of themes including: history, music, religion, commerce and the migration experience.

In addition to live music, the presentations delivered by a mix of respected academics and cultural commentators, will demonstrate that the contribution of Ulster migrants to the development of North American society is more diverse, complex and important than the prevailing orthodoxy or the simple traditional narrative of frontiersmen clearing wilderness and fighting Native Americans, while living in the backwoods inventing bluegrass music, distilling moonshine, and waiting to become president (Moore Sinnerton, What's the Story? Ulster-Scots and the media - Ulster Scots in the media, Ulster and Scotland Shared Inheritance Conference 2014)

The conference will reveal the nature of the deep relationship between Ulster and North America as will be evident in Alister McReynolds thought provoking presentation, ‘The Gentle and thoughtful Scotch Irish: their contribution to civilisation rather than bloody empire creation’, while Dr Johanne Devlin Trew will explore the many contemporary connections. Any discourse on Ulster and North America must cover the massive movement of people across the Atlantic and this topic will be covered by Dr Linde Lunney in her talk on that seminal event, the 1718 migration, and Prof. William J. Smyth who will shed light on that often overlooked migration of Ulster folk to British North America and the emergence of Toronto, ‘the Belfast of Canada’. The shared cultural contribution will also be evaluated as we benefit from the insight of musician and Director of the Belfast Nashville Songwriters Festival, Colin Magee, who will also provide a musical contribution at what promises to be a memorable event. Common Currency will thus deliver an engaging mix of music, presentations and debate and will appeal to the student of Ulster and North American history and the lay person who wishes to learn more.

DR LINDE LUNNEY: Aghadowey, 1718 and the beginning of emigration – in 2018 should we celebrate or commemorate?

DR BRIAN LAMBKIN: Ancestral Homes and Family History: the case of the Mellons of Tyrone and Pennsylvania

ALISTER MCREYNOLDS: ‘The gentle and thoughtful Scotch Irish’ – their contribution to civilisation rather than bloody Empire creation

MARK THOMPSON: ‘How Sweet The Sound’ – Hymns and Hymwriters from Ulster and North America

COLIN MAGEE: ‘An American Dream’ – A song of Emigration to the New World

PROF. WILLIAM J. SMYTH: The Enduring connection – Ulster Migration to British North America and the Emergence of Toronto, the Belfast of Canada

Dr Linde Lunney is a researcher and writer in the Dictionary of Irish Biography, a project in the Royal Irish Academy, Dublin.

Dr Brian Lambkin is Director of the Centre for Migration Studies at the Ulster- American Folk Park and co-author of Migration in Irish History, 1607–2007.

Alister McReynolds is a former Principal and Chief Executive of Lisburn Institute of Further and Higher Education and author of Kith and Kin: The Continuing Legacy of the Scotch-Irish in America (2013).

Mark Thompson was Chair of the Ulster-Scots Agency from 2005–09. His
background is in the creative industries and he has a wealth of experience in bringing Ulster-Scots heritage to the wider public.

Dr Johanne Devlin Trew is a lecturer at the Institute for Research in Social Sciences in the School of Criminology, Politics and Social Policy, Ulster University. In 2013 she published, Leaving the North: Migration and Memory, Northern Ireland, 1921–2011.

Gillian Hunt is Research Officer with Ulster Historical Foundation and one of the Foundation’s regular speakers during its annual lecture tours in North America.

Colin Magee is a songwriter, collector of songs, television producer and community worker. In 1994 he started the Eagle Wing Festival and conference exploring themes of emigration. As Director of Panarts he has created the Belfast Nashville Songwriters Festival and continues to organise music events in both cities.

Prof. William J. Smyth is President Emeritus of National University of Ireland
Maynooth and is a former professor of Geography. He has published widely on Irish links with Canada his latest book is Toronto, The Belfast of Canada (2015).

The event is free of charge but registration is essential as places are limited. To reserve your place contact Ulster Historical Foundation, 49 Malone Road, Belfast, BT9 6RY.

Common Currency is a conference hosted by the Ministerial Advisory Group (MAG) Ulster-Scots Academy in partnership with Ulster Historical Foundation. This important conference is free to attend and light refreshments and lunch will be provided.

For a downloadable copy of the Conference flyer please click here