Browse: Home > Projects > The Story of the Presbyterians in Ulster – Folding Map and Pocket History 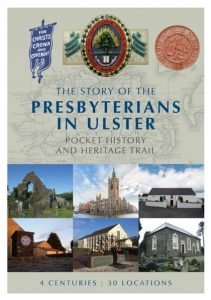 For four centuries Presbyterians have represented one of the most important elements in the population of Ireland. Their influence has been strongest in the history of the northern province of Ulster where for over 300 years they have constituted a majority of the Protestant population. The origins of the Presbyterian churches in Ireland can be traced to Scotland and to the successive waves of immigration of Scottish families to this island in the 1600s.

This folding map/pocket history looks at the story of Ulster's Presbyterians, highlighting the emergence of the historic Presbyterian denominations, the role of Presbyterians in the 1798 Rebellion and the formation of Northern Ireland, and the contribution of Presbyterians to education and the mission field. It also includes information on 30 sites where you can discover at first hand the richly textured history of Presbyterianism in Ulster. The publishers are the Presbyterian Historical Society of Ireland and the Ulster Historical Foundation with sponsorship provided by MAGUS.

The folding map and pocket history follows the hugely successful format of similar products published by the Ulster Historical Foundation and the Ulster-Scots Agency, including The Scots in Ulster, and The Plantation of Ulster: The Story of the Scots.

You can purchase it here: https://www.booksireland.org.uk/store/all-departments/presbyterians-ulster-map