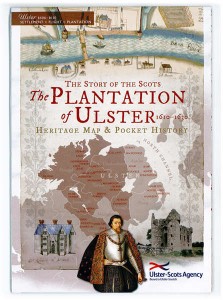 In the early seventeenth century 20-30,000 Scots crossed the North Channel into Ireland. Together they formed part of one of the most significant movements of people in these islands.

Many came to the settlements in north-east County Down encouraged by two Ayrshire Scots Sir James Hamilton and Sir Hugh Montgomery from 1606 onwards. Others settled in County Antrim on the lands of the MacDonnells and others.

The official Plantation that affected counties Armagh, Cavan, Donegal, Fermanagh, Londonderry and Tyrone was different for here settlement was not the result of private endeavour, but rather was part of a government-directed scheme of colonisation. This was Scotland's first, and ultimately most successful, project of colonisation beyond its shores. This map and pocket history tells this story.

The text was prepared by Dr William Roulston and the design was executed by Mark Thompson Design. Sponsorship was provided by the Ulster-Scots Agency.