Plantation of Ulster Booklet and CD 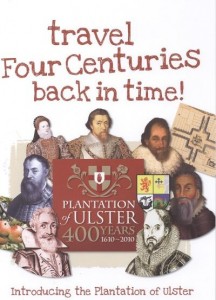 In 2008 the Ulster Historical Foundation was asked provide advice and assistance on a project being run by the Ulster Scots Agency under the Special EU Programmes Body (SEUPB). The aim of the project was to produce a booklet and CD that would present to 7-11 year-olds the story of the early seventeenth-century Ulster Plantation. 50,000 copies of each were produced and will be delivered to schools throughout Northern Ireland.

The Foundation assisted with producing the text for both booklet and CD. This was based around a series of key questions: what? who? why? where? and when? The text also considered the legacy of the Plantation. In addition the booklet included a section providing brief biographical sketches on a number of the leading Scots involved in the Plantation as well as a complete list of all the English and Scottish 'undertakers' (grantees).

For more information on how to get hold of the booklet and CD emailinfo@ulsterscotsagency.org.uk