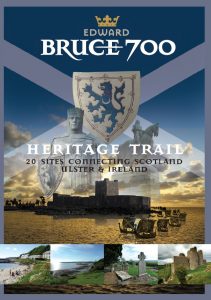 ON 25TH MAY 1315, EDWARD BRUCE SAILED FROM AYR TO LARNE LOUGH LEADING THE 6,000-STRONG BANNOCKBURN ARMY TO THEIR NEXT CHALLENGE...

The connections between Ulster and Scotland date back millennia. The story of the campaign in Ireland led by Edward Bruce, brother of King Robert I, of 1315–18 is one of the most important early examples of shared Ulster-Scottish history. Though the story may have largely slipped from the popular consciousness, historians have long recognised that the Bruce campaign in Ireland was an event of far-reaching significance.

The story is a far from straightforward one and reflects all of the complexity of the relationships between these islands in the medieval period. For example, Robert Bruce was married to a daughter of Richard de Burgh, Earl of Ulster, the man who would be the Scottish army’s principal opponent in the north of Ireland. Robert Bruce was also the feudal lord of a large swathe of territory in County Antrim through his mother's family. There is even a suggestion that his younger brother Edward may have been fostered by an Irish family. At other times Scots fought Scots and Anglo-Normans battled Anglo-Normans.

Crucial to the Scots early successes was the support they received from a number of the Irish leaders, to some of whom the Bruces were related. The Scottish campaign in Ireland began less than a year after Robert Bruce's crushing victory at Bannockburn in June 1314. It was led by his brother Edward who seems to have needed little encouragement to take charge of the campaign. Indeed, many see him as being the prime instigator of it and that he was motivated by dynastic ambitions of his own. As John Barbour states in his epic narrative of 1375, The Brus, The History of Robert the Bruce King of Scots, Edward, ‘with great joy in his heart, and with the consent of the king, gathered to him men of great valour.’

This folding heritage map and trail covers 20 sites in Ireland and Scotland (10 in each) linked to the Bruce campaign in Ireland.

It was produced by Ulster Historical Foundation, the Ministerial Advisory Group – Ulster-Scots Academy and the Ulster-Scots Agency, and can be purchased here: https://www.booksireland.org.uk/store/all-departments/edward-bruce-700-heritage-trail-booklet