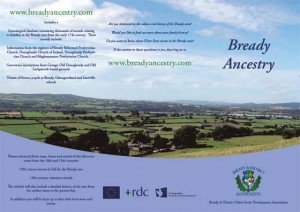 In conjunction with Bready Ulster-Scots and District Development Association, the Foundation implemented a wide-ranging project with several different elements. The Bready Association was formed in 2001 to promote an interest in, and appreciation of, the history and culture of the Bready area in north-west County Tyrone. In 2004 the Association successfully applied to the RDC under the EU Programme for Peace and Reconciliation (Peace II) for funding for a project to erect name stones at the boundaries of townlands along the public roads in the area. Townland names would thus be preserved and future generations would be aware of their existence and value to the local community. The project encompassed seventeen townlands in the Bready area.

Plans are well underway to build a new cultural centre in Bready on the site of the present Orange Hall and Badminton Hall in Bready. This new centre will become a focus for Ulster-Scots activities in the area and will be a significant boost to the village, which in recent times has lost its shop and post office. Bready is the most active Ulster-Scots group in Northern Ireland. In addition to Ulster-Scots activities the new centre will feature an historical exhibition. As part of the project ten interpretative panels were researched and designed by the Ulster Historical Foundation. These will be put on display in the new centre. Each of the panels covers a different aspect of the history of Bready, looking at the churches, schools, farming, archaeology and Plantation etc.

An important part of the project involved the creation of a website devoted to the history of the townlands of Bready and the families who lived in them. This website has been given the name Bready Ancestry and it includes information on the heritage of the Bready area and will have a searchable genealogical database containing nearly 30,000 individual records relating to families who lived in the area over the last 400 years. Information has been extracted from the records of local churches, including Donagheady Church of Ireland which has registers dating back to 1697; inscriptions from Grange, Old Donagheady and Old Leckpatrick burial grounds; records of the Abercorn estate; names of pupils at local schools, including Bready Primary School; the 1901 census; 19th-century valuation records. All the information from these sources has been made available for free on the website.

A booklet providing a brief introduction to the history of Bready as well as a summary guide to sources of interest for the local and family historian has also been written by William Roulston, a native of Bready and Research Officer with the Ulster Historical Foundation. It has been distributed for free to all the homes in the Bready area. The launch of the project took place on 19 January 2006 in Bready Jubilee Primary School. Representatives of Bready and District Ulster-Scots Development Association, the Rural Development Council, The Ulster Historical Foundation and the Ulster-Scots Agency were present along with about 150 locals and visitors to the area.