Remembering May Blood and Éamon Phoenix 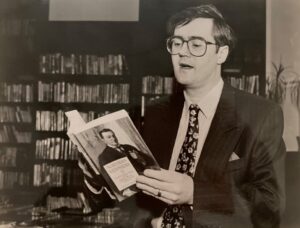 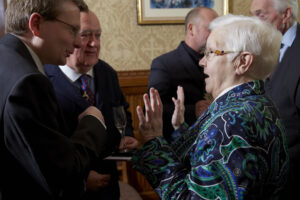 The staff and trustees of the Foundation are stunned and saddened to learn of the untimely passing of Dr Éamon Phoenix. We would like to offer our sincere condolences and sympathies to Eamon’s wife Alice, daughter Mary Alice, and wider family circle.

The Foundation has lost a great friend in Éamon. His very long relationship with the Foundation was a demonstration of his loyalty and support for the charity and its staff. Éamon was the Foundation’s currently longest-serving trustee, having joined the board in 2000. In addition, he had given his time and expertise to our Publications Committee for an even longer period.

He was always enthusiastic in getting involved in our various activities not least publications and public events. The Foundation published his very successful Northern Nationalism in 1994, which was based on his PhD thesis, and also his guide for secondary school pupils about Friar’s Bush Graveyard – Two Acres of Irish History, both reprinted in their time. Éamon was involved in numerous other UHF book projects as editor, contributor and supporter who helped to access funding or who helped to launch the works.

The abiding memory of most people was Éamon’s ability as a speaker – to make our history understandable to those with no background or experience in the discipline and to tell the story well. In fact, very well indeed. He was a regular favourite during the Foundation’s ground-breaking annual family history conferences where he regaled our international visitors with tales of old Belfast via his legendary tours of Friar’s Bush Graveyard. He spoke often at our book launches, courses, conferences and seminars, and most memorably had the audience howling with laughter as he thanked (and not a little bit managed to upstage) the speakers at one of the Foundation’s major milestone anniversaries. That energy, infectious enthusiasm and below the radar hard work will be sadly missed by all his friends at the Foundation.

Éamon’s passing has left us reeling as the Foundation was only coming to terms with the loss of the late Baroness May Blood. May served with distinction, as she did in all of her endeavours, on the Foundation’s board for 10 years, working alongside Éamon and our other trustees.

May was a wonderful person, supportive of individual staff on a personal level and practical and hardworking on behalf of the Foundation. She helped to open doors, introducing this organisation to individuals and communities across Belfast and Northern Ireland that often were unaware of the Foundation’s work. As an astute and long experienced fundraiser (for her many interests) May’s skills and expertise were always at our disposal, she crucially helped us to re-establish an invaluable link with the Irish American Partnership in the USA.

May was legendary for having the common touch, and equally could cut it in any gathering or situation. Moreover, as everyone knows, she could speak truth to power in such a frank, but disarmingly charming way. You trusted May implicitly not very long after meeting her. Her no nonsense, straight and honest yet very warm approach was reassuring to those who knew her.

It was in May’s range of skills and connections that she could help and did so willingly. She introduced the Foundation to local fundraisers in Northern Ireland, helping to establish relationships with organisations such as the Integrated Education Fund to promote the Foundation’s publications, for example, Calming Conflict by Brian Lambkin, and shared her extensive contact list from her other organisations – be it integrated education or Surestart. One small example may suffice. Not long after becoming a trustee May hosted an event in the Palace of Westminster for the Foundation which led to several very valuable connections for the charity which have lasted and grown over time. Typical of her approach, she was not a mere figurehead, she hosted, planned and checked the fine detail for this event to ensure its success.

Regrettably, May retired from the Foundation’s board in January 2021 as she chose to reduce her work load due to declining health. We were sorry to see her go as the staff and trustees had complete respect and admiration for May and her contribution. And typical of May, she signed off with the assurance, ‘if I can be of any help please do not hesitate to contact me’. Given her character and decency, they were words that we knew had been offered with a genuine heart.

The untimely deaths in close succession of two highly respected and much-admired trustees, friends and active supporters of the Foundation is a great shock and loss. May we offer our sincere sympathies to the wider family circles of May and Éamon at this time.