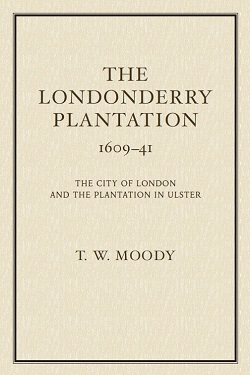 Ulster Historical Foundation is pleased to announce the forthcoming publication of a new edition of T. W. Moody’s seminal work, The Londonderry Plantation, 1609–41: The city of London and the Plantation in Ulster coming in April 2019.

We invite you to subscribe to this new publication.

For only £24.99 (US $34.99/€29.99) plus P&P subscribers will have their names printed in a special list in the book; and be the first to have their copies dispatched on the day of publication (Note: publication is expected in April 2019.)

New edition details
This new elegantly-designed edition will reproduce the original work in facsimile, casebound with dustjacket, with a Foreword by Prof. James Stevens Curl. The original illustrations will be reproduced to modern standards of printing and in full-colour reproduction, where available in their original format.

In order to publish this work to the high standard and quality finish deserving of T.W. Moody’s scholarship, the Foundation needs to secure pledges of £5,000, to match the funding already raised. Your financial support will help us realise this objective, ensuring your bookcase is graced by a beautifully-produced new edition of a classic Irish historical title, and the modern research community will have broader access to a work of immense historical value.

About The Londonderry Plantation, 1609–41

The Londonderry Plantation was published originally in 1939. Only 500 units were produced and printed in the Channel Islands where, reputedly, part of the stock was impounded by the occupation of the islands by the
Germans at the end of June 1940.

Thus a hugely important work, by an accomplished historian, who was able to draw on historical archives in the City of London which perished in the Blitz, never reached, as it should have, the wider research community who would have benefited from its scholarship. Consequently, the Foundation wishes to see that it is made available for a modern audience.

This publication was the first seriously scholarly attempt to understand what actually happened in the Londonderry Plantation; it was published at a time when Irish historical writing was entering a new phase with a more ‘scientific’ approach to historical writing and research, with Moody and his peers leading the way; and it is a valuable resource for local historians and those interested in changes wrought by developments in the seventeenth century. As Prof. James Stevens Curl comments in the conclusion to his new Foreword to the work:

"So Moody’s great book remains of singular significance in the history of Ulster, and although I was privileged to carry on research into the Londoners’ Plantation well past 1641, I acknowledge the integrity of Moody’s scholarship and industry in laying the foundations of proper source-based narrative, free from speculation, hoary mythology, and cant."