By Ulster Historical Foundation on March 25, 2015

We are pleased to announce the addition to our Online Databases of over 27,000 new Church of Ireland records for Counties Antrim and Down!

These new baptism, marriage and burial records are from 24 parishes across Antrim and Down and were transcribed by our Emeritus Research Director, Dr Brian Trainor. 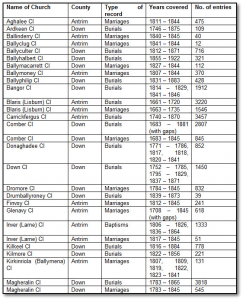 These new records contain a wealth of information of use to both the family and local historian and the burial registers, in particular, are full of interesting entries.

For example in Ardkeen CI there was noted the burial entry of Henry Cleland, aged around four months old, in 1823 with a note by the minister that stated that he was “found dead in a field with a letter mentioning his name. Perished from cold and hunger; Coroner's inquest wilful murder.”

Occupations were sometimes recorded, especially if the deceased was in the military or the clergy. Ballyculter CI’s burial register occasionally contained the occupation of the deceased, particularly if they were servants, for example in 1818 Daniel Kain “Lord Bangor’s man”, William Wilson “gardener to Mr Price" and Roger Wade “steward to Mr Hoey” were all buried. This may be the only record of their employment which now exists.

Carrickfergus CI’s register contained an entry of the burial in May 1776 of Mr McCracken, “the buckle beggar”. A buckle beggar was someone who performed marriage ceremonies “in a clandestine and irregular manner”.

The history of a local area can also be seen through the Church records. For example one can see in the Blaris (Lisburn) CI register the arrival of the Duke of Schomberg’s army in September 1689 by the increase of the deceased who were serving in that army. These were not only soldiers, for example, in December 1689 John Redbird “master baker to [the] Duke of Schomberg” died and in January 1690 Thomas Mansfield, “one of King William’s bakers” was buried.

In coastal parishes, we find the burial records of sailors, fishermen and those who had drowned. For example in Ballyhalbert CI, in January 1864 there was the burial of three men who were shipwrecked including John Morrison from Douglas on the Isle of Man.

In this register we also find the burials of two men from the HM Cruiser Bayano which was torpedoed by a German submarine in 1915.Donaghadee CI’s burial register contains an entry for James Conlin, a tide-waiter (customs officer) who was “killed by a fall on the quay” in October 1783.

In the majority of entries the cause of death was not recorded, but unusual incidents were often noted by the minister. For example in Ballyphilip CI we find Patrick Kelly, aged 15 years from Portaferry who died in June 1876 from “a fall from a velocipede” (an early bicycle). Carrickfergus CI’s register details the burials of four men in October 1752 who were “killed with the bursting of a cannon”.

Magheralin CI’s records contain an entry for Edward Lunn, an innkeeper who was buried in July 1817; he “died suddenly at Maze races”. Down CI’s burial register contains information on John McKenzie, the son of Prudence Coslett, who was buried in June 1765 after he “fell off the Abbey”.

Many of the burial records also contain the name of the father, husband or next of kin of the deceased, providing additional information on each family. Some also record ages at death and occasionally occupations.