By Ulster Historical Foundation on February 1, 2016

We are pleased to announce that we have added over 51,000 new birth, marriage and burial records to our website!

To celebrate the release of these new records, we are also extending our 50% Off Sale until 14th February 2016! 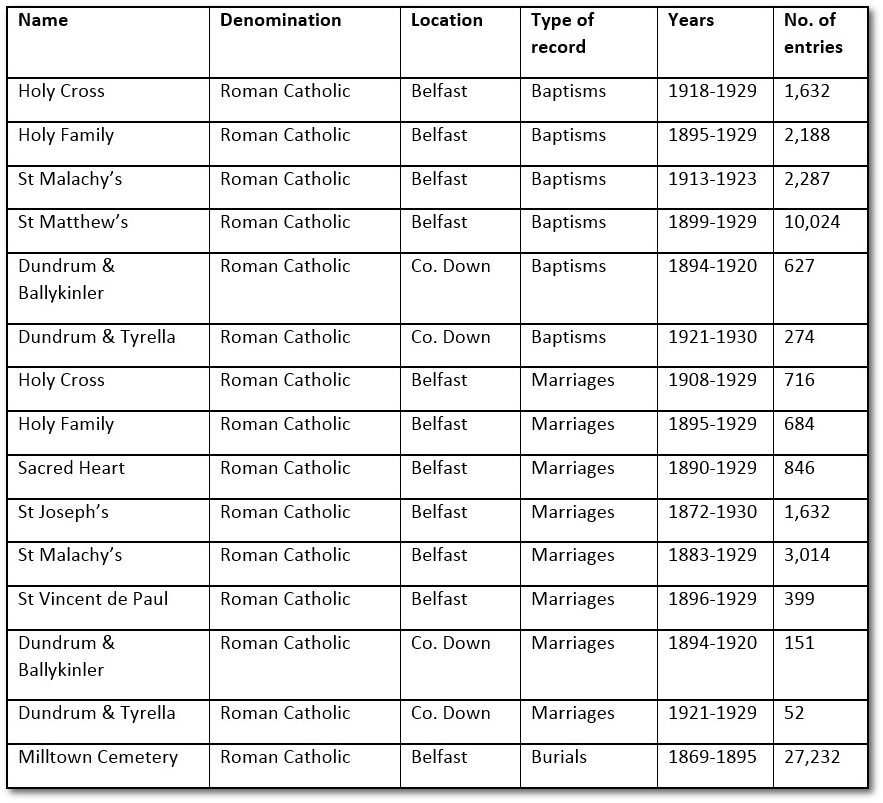 The majority of these records relate to baptisms and marriages in Roman Catholic churches in Belfast from 1900 to 1930 which are not available online elsewhere. We have also added over 27,000 burial records from Milltown, the main Catholic cemetery in Belfast. These burial records include the name, age and address of the deceased and cover just the first volume of burial registers from 1869 when the Cemetery opened, to 1895.

Please note that Guild members can access these burial records for free through the members’ databases.

Catholic baptismal records can be very informative as often details of the individual’s later marriage – the date, place and name of spouse – were recorded alongside the baptismal entry. Places of marriage recorded in the St Malachy’s baptismal register include: Brisbane, Australia; Cairo, Egypt; London, England; New Jersey, USA and Ottawa, Canada. Other later notes included details of ordinations. Priests also often made notes if a parent was deceased, not a Catholic or from outside the parish, for example: ‘Mother a native of Falcarragh, Co. Donegal’. These additional details can be of huge importance in searching for ancestors, for example, within the baptismal register of Dundrum and Ballykinler in County Down the priest noted the following information on two baptisms:

‘Father is a Protestant living at 40 Garwood St Belfast; baptised conditionally in Ballykinlar chapel having previously been baptised in a Protestant church in Belfast.’

Marriage records vary in detail. For example the priest at St Joseph’s Church recorded the names and address of both parents of the bride and groom as well as the names and addresses of the witnesses from 1873; St Vincent de Paul registers include this level of detail from 1913. Civil marriage registers never record the names of the mothers or the addresses of the parents and witnesses so these are invaluable details unavailable elsewhere. In particular if the bride or groom had moved to Belfast but were not born there, it can often be very challenging to discover their original place of birth but marriage registers that include the parents’ address can suggest a potential area to research.

It should be noted that the addresses of the bride and groom referred to their address on the day of marriage, which was not always their usual residence. Often one spouse stayed somewhere other than their usual residence on the night before the wedding, to be close to the church. This is demonstrated in one register where the couple gave their address as Carrick Hill in Belfast but the priest noted ‘One night in Carrick Hill, immediately from Newry’. Often witnesses were found to be siblings of the bride or groom; knowing the addresses of the witnesses at the time of the marriage can help confirm these relationships.

There are examples of additional notes written by some priests in cases where the parents of the bride and groom were not Catholic, were deceased or were living elsewhere: ‘Father of bridegroom in America’. Other details recorded included whether the bride or groom were converts or had any sort of blood relationship, which required a dispensation from the Church. This was something to which priests in certain parishes seemed to pay particular attention. Other pieces of information, not always available elsewhere may have been recorded, for example, a priest recorded that the groom had been ‘shot in Boer War’. Finally, many priests made a note to say which parishes they had notified about the marriage which can also suggest a possible place of birth, for example: ‘Notice sent to Barrow-in-Furness; notice sent to Lisburn’.

We hope you will enjoy poring over the Foundation’s latest release of Catholic Parish Registers.

It is a perfect opportunity to take advantage of our Current Half-Price Sale and search the new records.