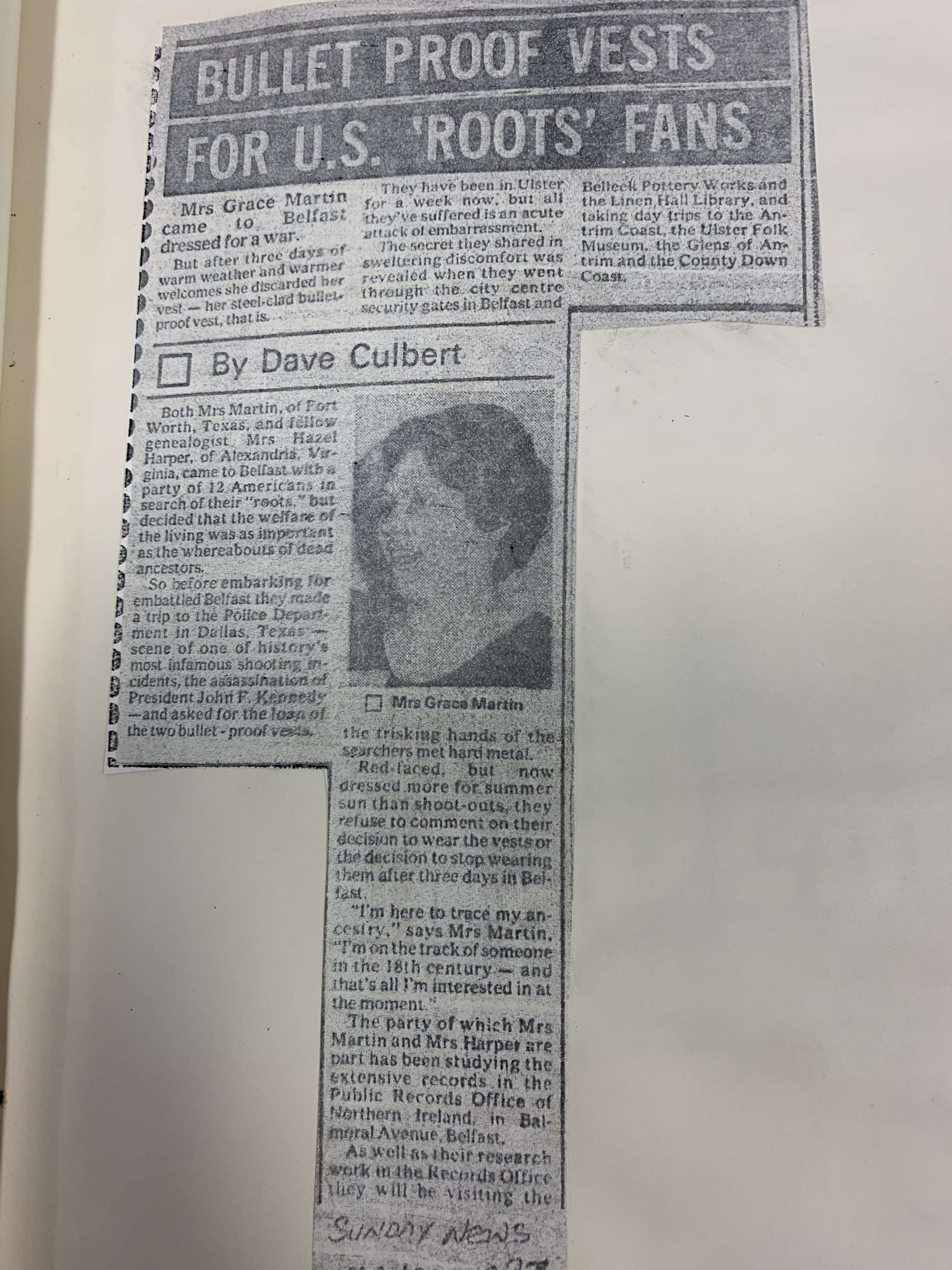 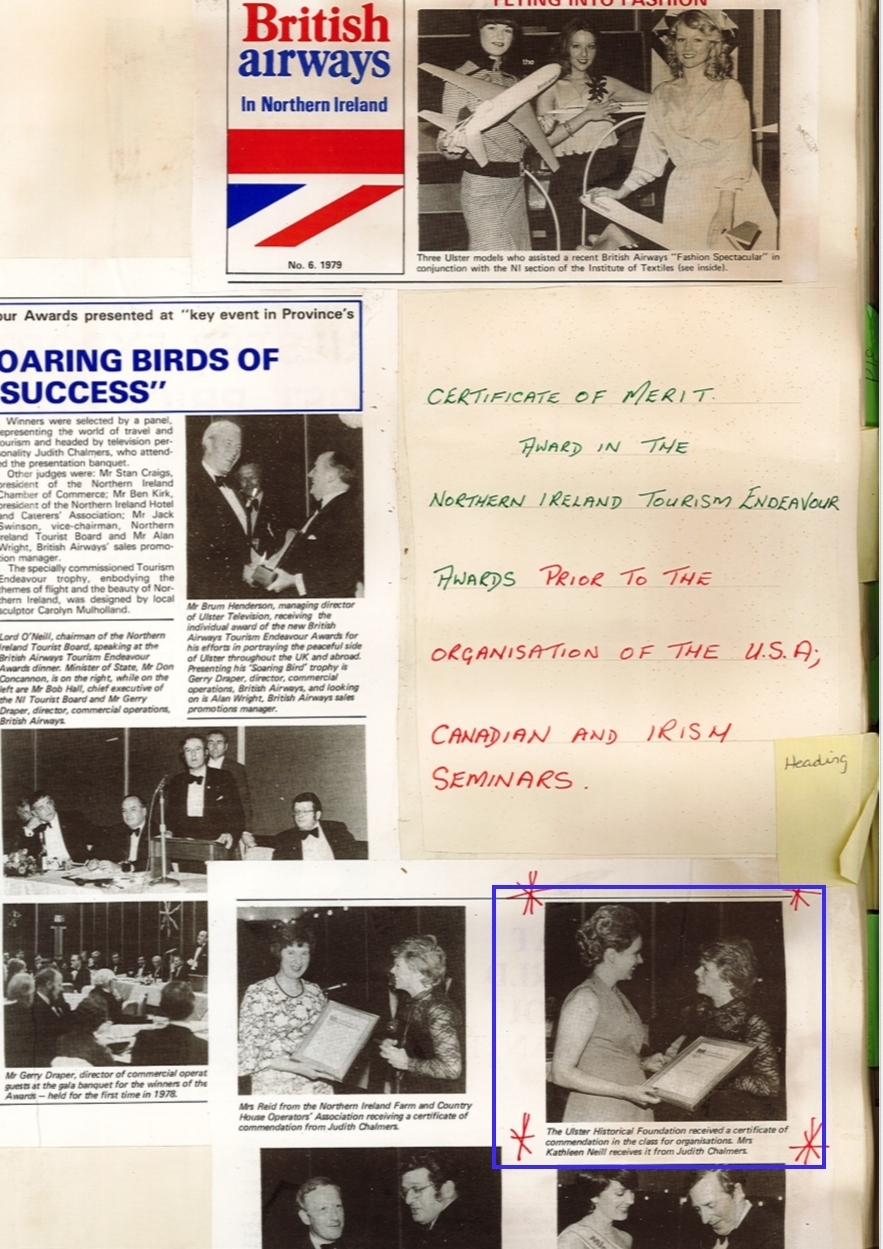 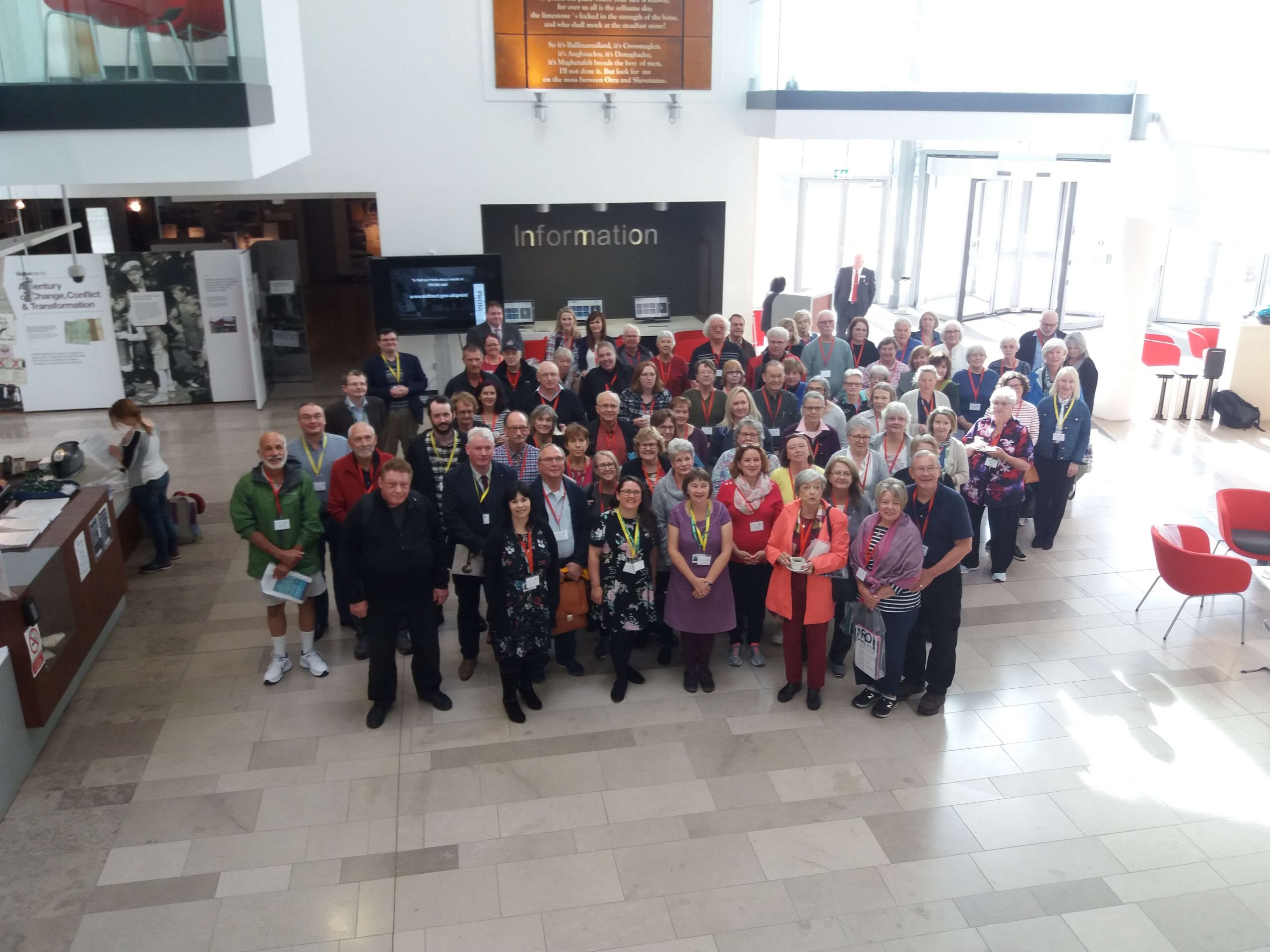 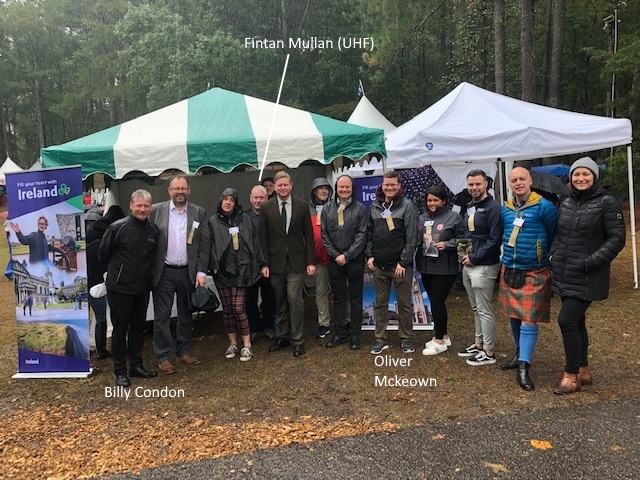 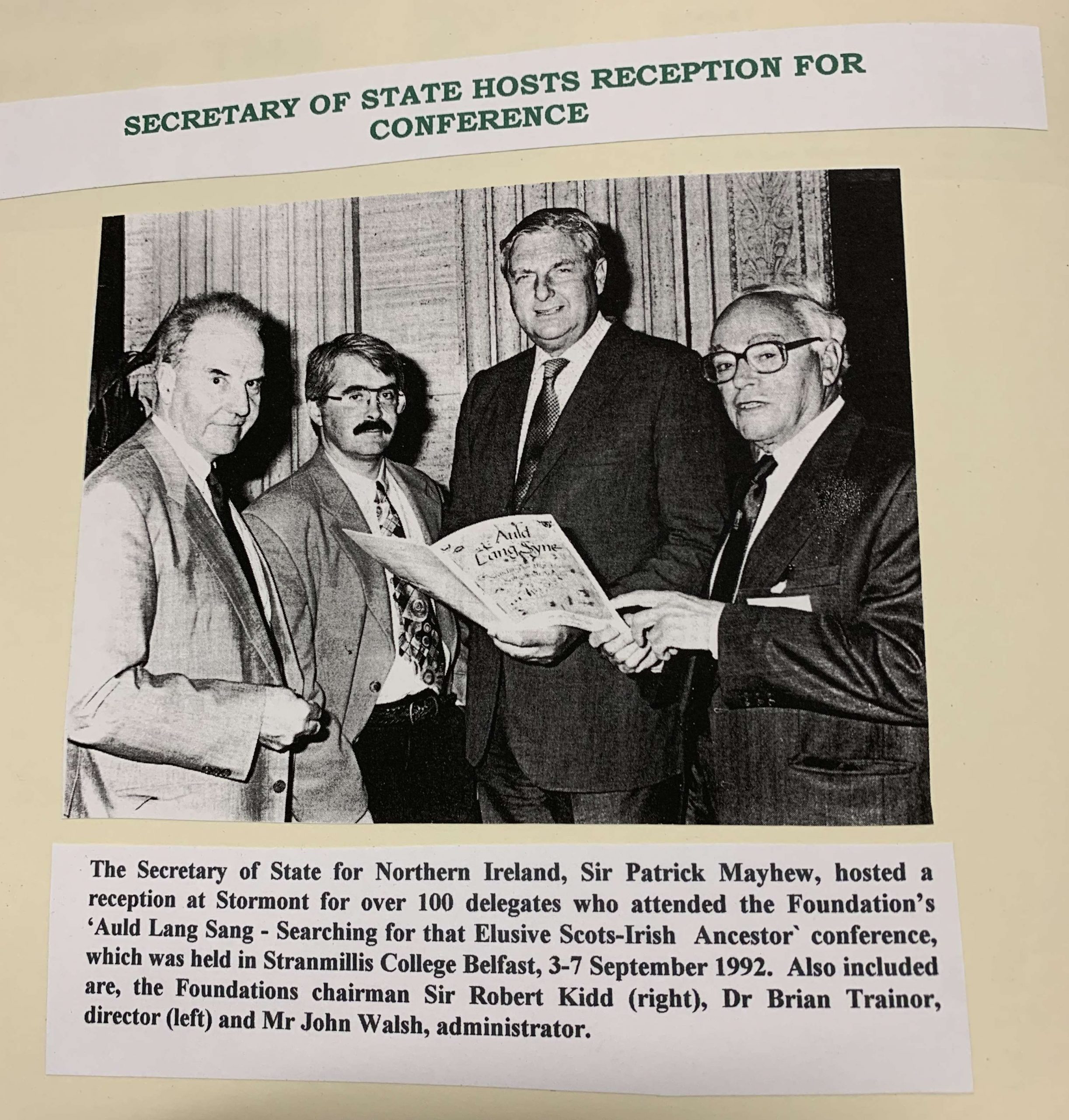 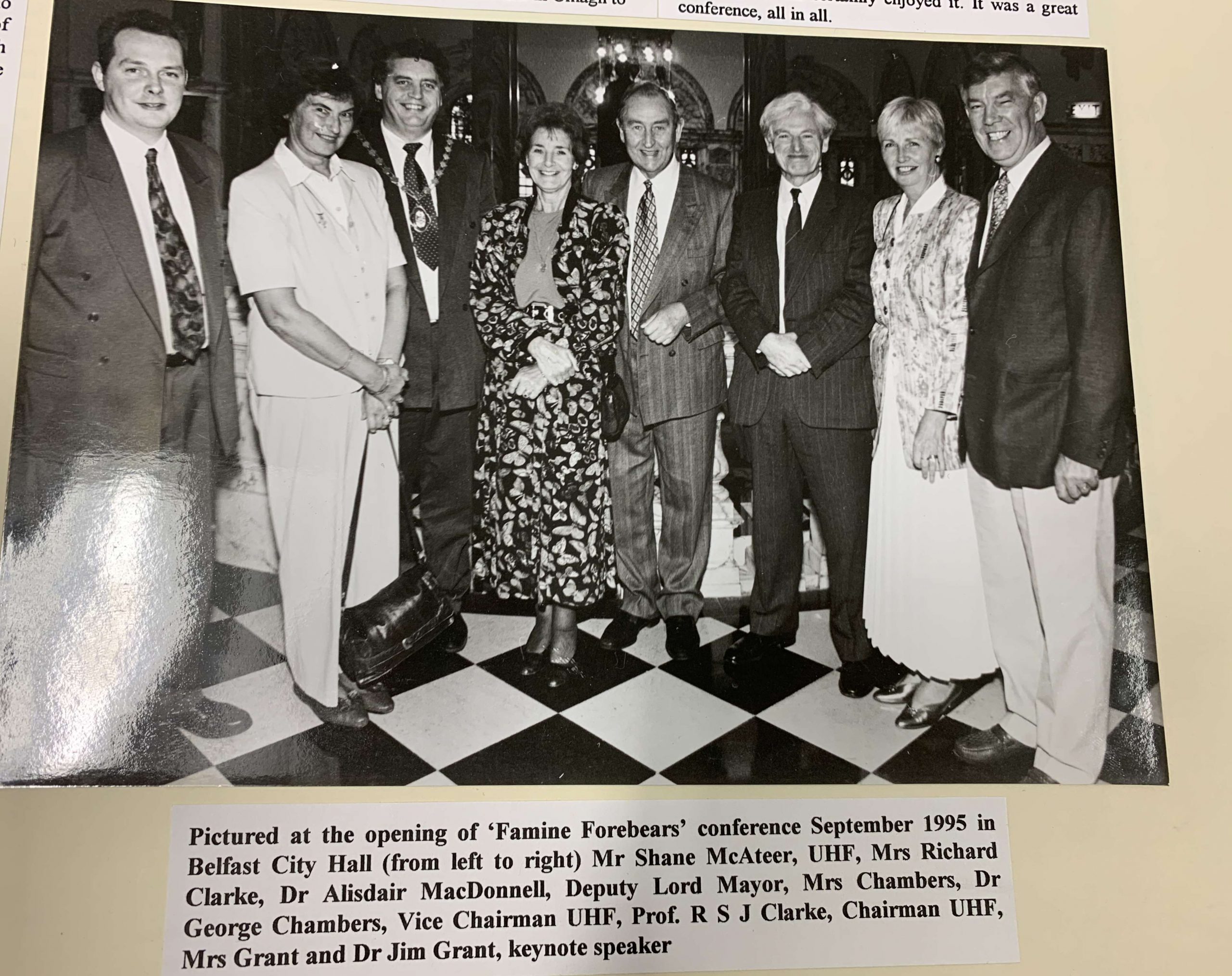 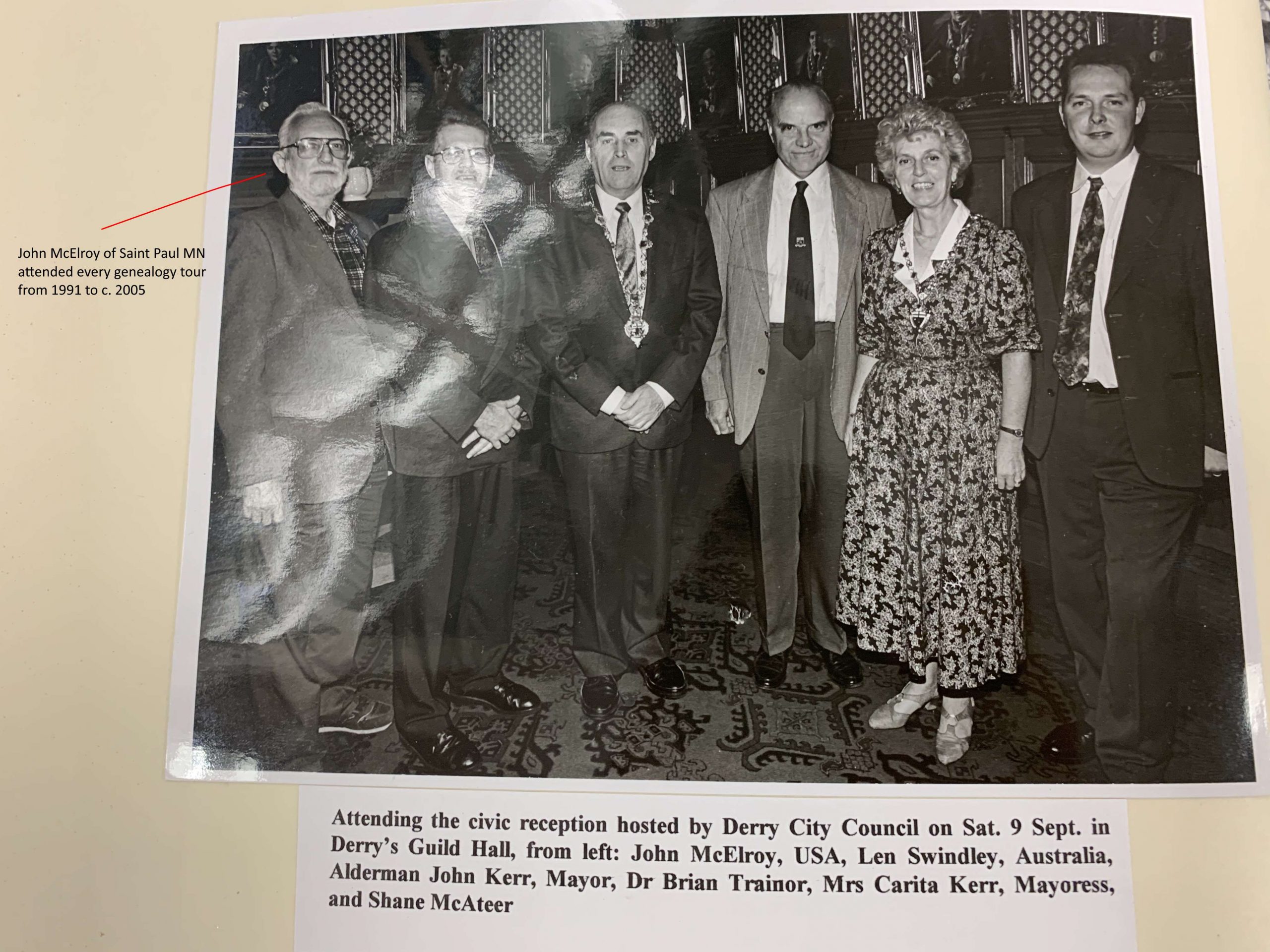 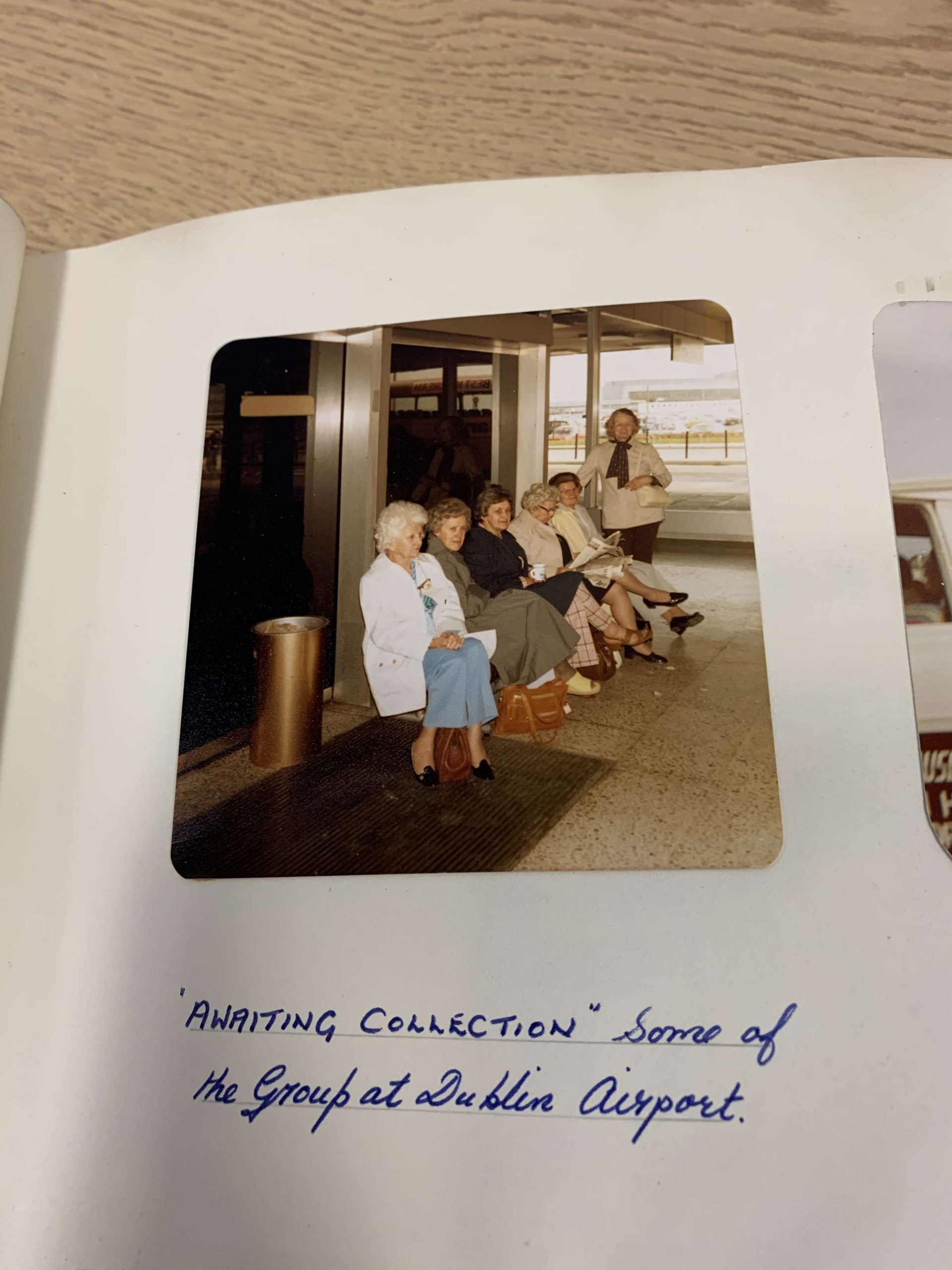 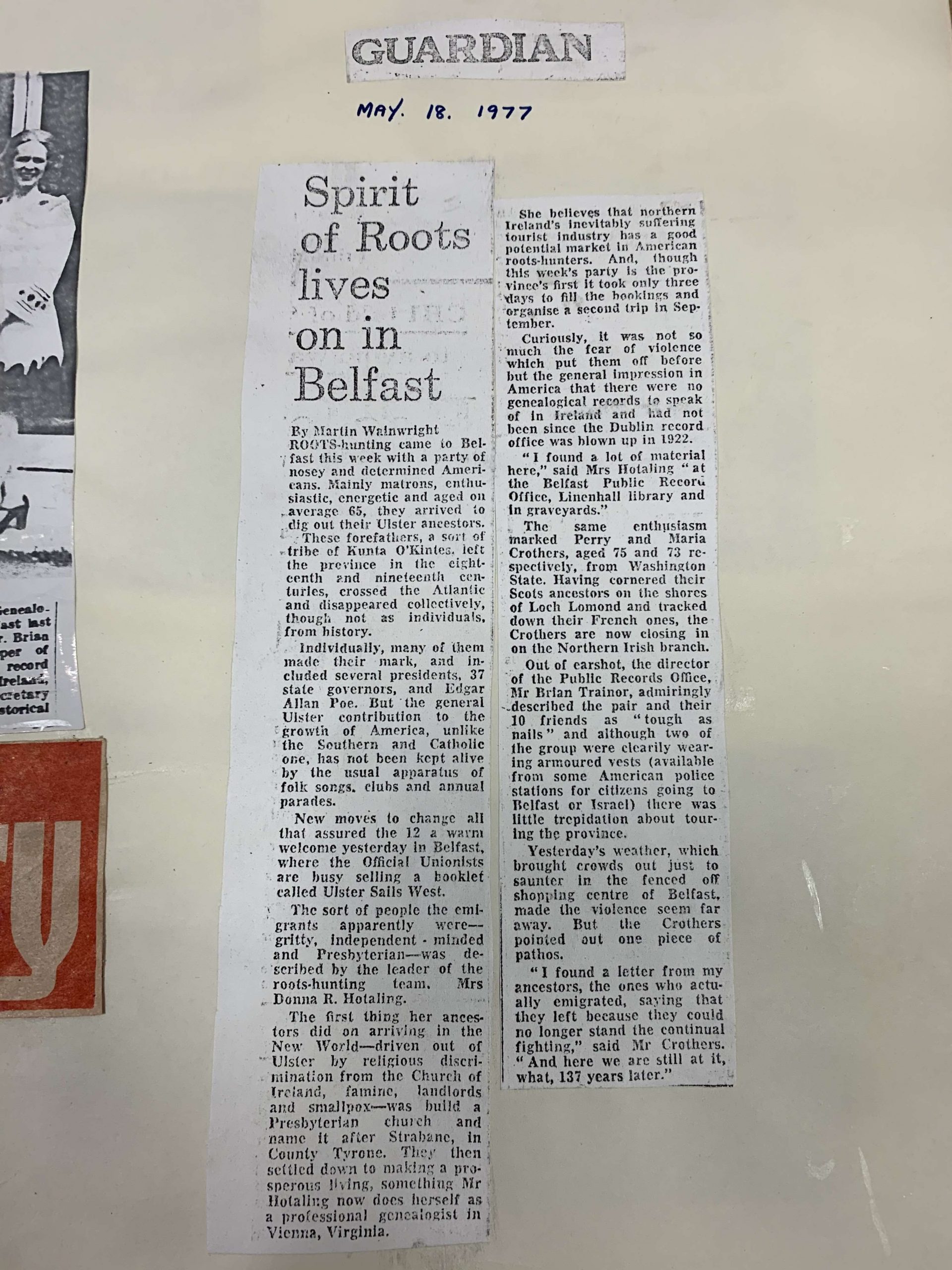 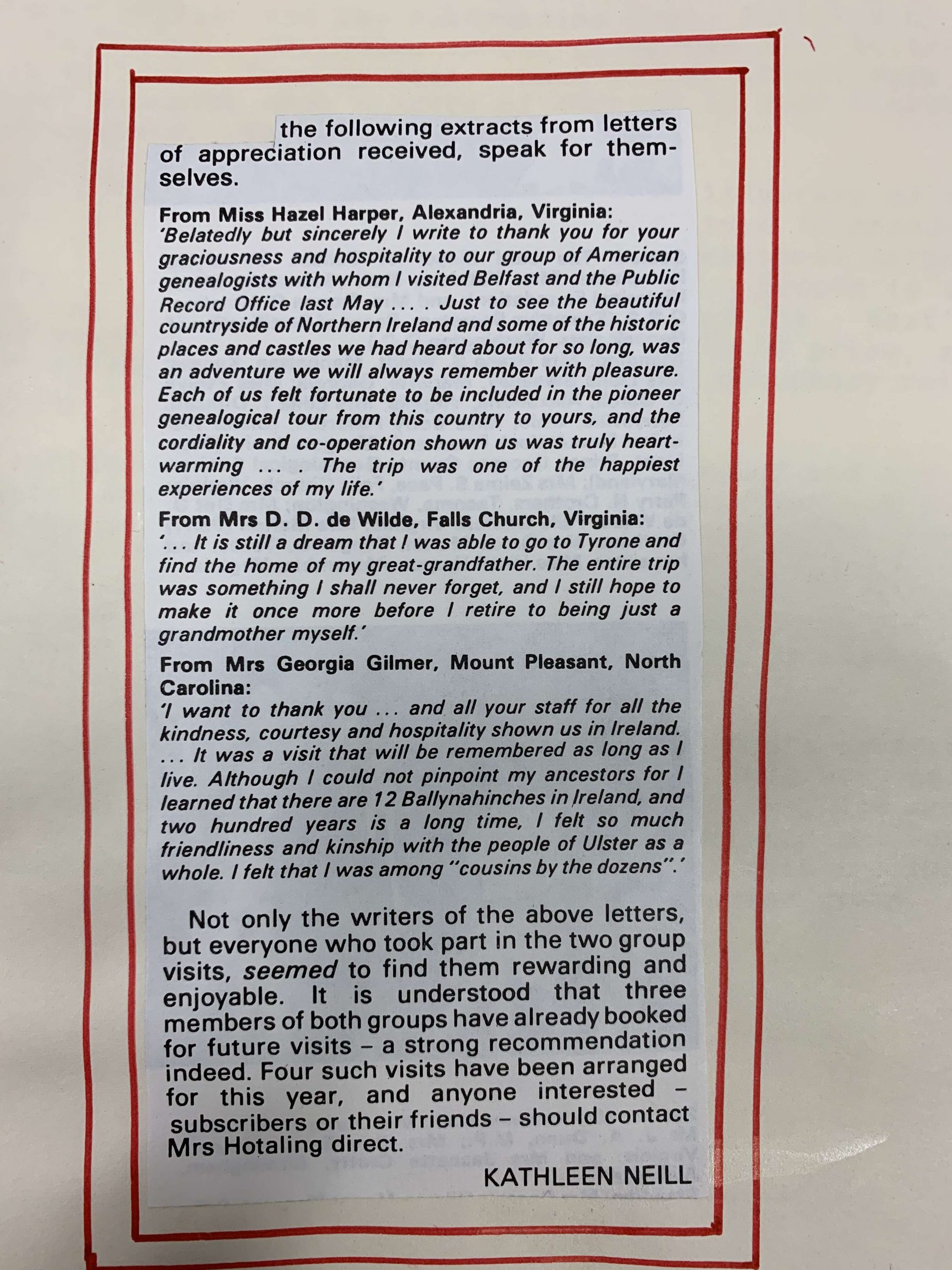 We would like to put on record our concern that Ulster Historical Foundation has not been accurately evaluated in respect of our being in an eligible sector.

In addition, the Foundation does not solely service the visitors who arrive here. This organisation has for those 44 years been the spark that planned a visit to Northern Ireland (through our family history research service), or in very many cases has been the organiser of bespoke programmes which bring heritage tourists to Northern Ireland. The Foundation is proactively enticing and encouraging visitors through its tours. This is all new business for the local tourism economy. It would not exist otherwise.

Moreover, staff of the Foundation have since 1979 been proactive in going to North America and less frequently Australia and New Zealand (and Great Britain) to showcase Northern Ireland and to promote it as a visitor destination. The organisation bears the costs of these overseas promotional visits itself.

We therefore cannot understand how a car wash or petrol station is eligible and yet the Foundation does not fall into one of the sectors: Retail, Hospitality, Tourism and Leisure.

We would contend that the Foundation falls into possibly three of those sectors.

The Foundation is self-financing, it receives no financial assistance from central or local government. It is a net contributor to the economy not dependent on government assistance/grants.

Its involvement as a significant heritage tourism provider has resulted in the Foundation generating some 800 bed-nights for the Belfast economy each year over the past five years from our genealogy programmes (typically held in June, September and October). These same events also generate an approx. additional 1,200 bed nights for the wider Northern Ireland and Republic of Ireland economies – in extended stays by our participants. See group photograph in the foyer of the Public Record Office of Northern Ireland (PRONI) in 2018.

As well as bringing business to accommodation providers, through these events the Foundation patronises shops, restaurants, cafes, visitor attractions, and public institutions, especially the Public Record Office of Northern Ireland, etc. None of this business would be created in the tourism, hospitality and visitor attraction sectors but for the efforts and activities of this organisation.

In 2020 the Foundation planned to hold three family history tours in Northern Ireland: June, September and October. Because of the crisis the June 2020 event has had to be postponed and refunds paid to registrants for that programme. This is no different from the cancellations faced by hotels and tour operators and the financial loss every bit as painful. We have already updated the website to offer a programme for June 2021.

A week-long programme organised in partnership with the New York Genealogical and Biographical Society planned for late April 2020 also had to be postponed because the current crisis.

Alongside the larger genealogy tour events, the Foundation also offers 5-day and 3-day courses. These typically are held in winter months, thereby extending the tourism season for genealogy and bringing additional business for the hospitality sector in the off-peak period. The next planned events are: 09–11 Nov. 2020 and 08–10 Feb. 2021 (see: www.ancestryireland.com/irish-genealogy-essentials/).

Unlike other seasonal activities, given the nature of genealogy the Foundation attracts, encourages and serves visitors for a full 12 months of the year. Based in Belfast for almost all of its existence the Foundation receives visitors to our offices on a daily basis.

We believe that given the role of the Foundation’s office it should be eligible under: Office (in eligible sector).

The Foundation is the designated genealogy centre for Antrim and Down as part of the Irish Family History Foundation’s island-wide network of county research centres.

As part of its routine work the Foundation regularly welcomes visitors who wish to use our research library. The Foundation has a specialised and high quality research library of considerable value to visitors. As they also come to visit our staff for research consultations (a tourism service provided every day from our office), or to use the library, or resource centre, the Foundation is a visitor attraction in its own right, see:

With the recent move to Kiltonga in Newtownards (the Foundation moved there at the beginning of March 2020) we have plans to enhance our visitor attraction situation by creating a genealogy hub and research centre. With free onsite parking for visitors at the new location, and located on a blue bus route, we believe the Foundation is a bona fide visitor attraction, that does not only service visitors who arrive in Northern Ireland for other reasons (which it does), but the organisation’s role is also a key factor in helping some visitors decide to visit Northern Ireland in the first place.

Furthermore, genealogy and local history are leisure pursuits, as much as any other physical activity, they get people physically and mentally active, engage with other liked-minded individuals to develop friendships and form groups, clubs and societies, and patronise other businesses and services.

The Foundation’s work in heritage and genealogy tourism is recognised by Tourism Northern Ireland and Tourism Ireland. The Foundation has on regular occasions been invited be part of the Tourism Ireland platform at overseas events including several visits to Stone Mountain Highland Games, Atlanta GA (to encourage those interested in Ulster-Scots heritage); the AARP expo in Las Vegas; ‘Discover Northern Ireland’ Grand Central Station New York (2010); Who do you Think you Are (London), and various direct to trade promotions at home and in USA. (See photo of a very wet group at Stone Mountain (Oct. 2019).)

You could contact representatives of these organisations to confirm:

As an example of this work in action having a direct benefit on Northern Ireland tourism in December 2018 Bill Condon, Vice President Marketing at Tourism Ireland, New York, helped to set up two genealogy programmes delivered by our organisation in New York as part of the Carnegie Migration festival in March and April 2019. One group was the New York Genealogical and Biographical Society. As a result of this interaction together we devised a heritage tour to Northern Ireland which we were to deliver in April 2020. It has been put back because of the lockdown and unfolding situation.

Over the past 15 years the Foundation has worked with local councils to create tourism-related products, such as apps, signage, leaflets and booklets and devising rich content for local visitor centres. We have worked with the following councils in this regard: Ballymena, Larne, Carrickfergus, Belfast, North Down, Ards, Castlereagh, Lisburn, Omagh, Derry and Strabane and their successors.

In 2014 the Department for Culture Arts and Leisure used the Foundation to develop an Ulster-Scots driving app for visitors: www.ancestryireland.com/about-us/free-ulster-scots-visitor-experience-app/

The staff of the Foundation began to undertake regular overseas promotional tours to North America in 1979 – to promote its work and encourage and facilitate visitors to come to Northern Ireland to research their roots.

These North American tours became annual in 1991 and the Executive Director has taken part every year since 1997. And I personally from 2001 (see: www.ancestryireland.com/usa-lecture-tour-2020/ ).

The Foundation receives no direct financial assistance for these tours but bears all the costs itself. Many tourism and heritage bodies, including Tourism Ireland, recognising the considerable value of direct face to face, and very targeted promotional opportunities presented by these tours, use the Foundation to publicise their visitor services.

Through these self-funded tours the Foundation publicises its own heritage tours and leisure services, and equally importantly promotes Northern Ireland and its attractions as a visitor destination to a major and core market sector for Northern Irish tourism.

We know of few other small organisations in Northern Ireland that not only serve the tourism and leisure sector here, but puts together its own roots tourism programmes and then directly and actively promotes Northern Ireland overseas at its own expense and to the direct benefit of many businesses in said local tourism industry.

The Foundation was established in 1956 as a bridge to the diaspora: to encourage their interest in Ulster history and genealogy, build up relationships, disseminate valuable information; and encourage visitors to return to the country of their ancestor’s birth as roots tourists.

From the very beginning the Foundation worked, encouraged and facilitated overseas visitors to come to Northern Ireland – we were often able to identify the place, townland or even farm from where their ancestors originated, leading to a journey of rediscovery to their family’s home place. In the 1970s this work was extended markedly and directly into becoming a tourism provider.

The Foundation started bringing overseas visitors to Northern Ireland in the mid to late 1970s at some of the worst periods in the Troubles. See sample photographs and newspaper reports of those early visits, including one report where a Texan woman brought a flak jacket with her for security – but she still came, at a time when no few others would visit here. An indication of the resilience of the roots tourist.

In 1979 the Foundation was presented with a certificate of commendation at the British Airways Northern Ireland Tourism Endeavour awards (see photo of Judith Chalmers, host of the ITV Wish you were here holiday programme).

From 1990 to approx. 2005, but particularly in the early years before the ceasefires and a viable peace process, Belfast City Council hosted a reception in the City Hall to welcome our overseas visitors to Belfast for the week-long family history events, in recognition of the fact that the city at that time received very few visitors, and hardly any large groups visiting Belfast. See photography of Dr Alisdair McDonnell, Deputy Lord Mayor welcoming the group to City Hall in 1995.

In 1992 Sir Patrick Mayhew, then Secretary of State invited the tour visitors to a reception at Stormont.