Browse: Home > Family Records > Ireland’s Memorial Records 1914–1918, being the names of Irishmen who fell in the Great War

Ireland’s Memorial Records 1914–1918, being the names of Irishmen who fell in the Great War 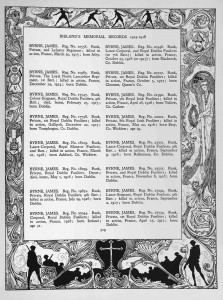 Published in 8 volumes in 1923 by the Committee of the Irish National War Memorial the work seeks to ‘perpetuate the names and personalities of over 49,400 Irishmen who fell in the Great War’. Only one hundred sets of this unique publication were produced at the time.

The borders were designed by the artist, engraver and stain-glass window designer Harry Clarke. As we approach the 100th anniversary of the start of the First World War, these records of the Irish war dead are a great starting point for researchers to use when looking for military ancestors. Combined with the records of the Commonwealth War Graves Commission website, and other military sources such as medal records, they help to build up a picture of the family members who served during the War.

This database is accessible by Guild members only.

I’ve found a mistake. How can I get it corrected?

We’re delighted to hear from people who have corrections or additions to the material published. Please write using the contact address given on the website, enquiry@uhf.org.uk. Don’t expect any changes to be made quickly, though! We need to make sure that the corrections are right, and we don’t have a lot of spare capacity to do that. We are also working on creating a way of showing corrections and additions to individual articles.