A walk around the walls in Derry~Londonderry reveals a splendid city crammed full of history, heritage, interest and a vibrant cultural scene.

This is the only remaining completely walled city in Ireland and one of the finest examples of walled cities in Europe. The walls were built during the period 1613-18 by the Honourable The Irish Society as defences for early 17th century settlers from England and Scotland.

The walls, which vary in width between 12 and 35 feet, and which are approximately 1.5km in circumference, form a walkway around the inner city and provide a unique promenade to view the layout of the original town which still preserves its Renaissance-style street plan to this day.

The city claims Europe’s largest collection of cannon whose origins are known precisely. Many of them thundered in anger over the two 17th century sieges. In 2005 the surviving 24 cannon were restored, and under expert supervision,often by hand, craftsmen, cleared the barrels of centuries of rubbish, stripped off layers of paint and corrosion and bathed, sponged and waxed the cannon back to their former glory. The cannon are displayed throughout the city walls with the impressive 'Roaring Meg' located on the double bastion.

Other important city landmarks (both inside and outside the walls) are visible from the ramparts including: First Derry Presbyterian Church, St Columb's Cathedral, St Augustine's Church, St Eugene's Catholic Cathedral, the Fountain area, 'Free Derry Corner', Rev. Walker's plinth (the statute and pillar on which it stood were destroyed in 1973), the Guild Hall, the Apprentice Boy's Hall, the Tower Museum, the new Siege Museum, the craft village, the Craigavon and Foyle road bridges, and the pedestrianised Peace Bridge (opened in 2011), the City Cemetery, the Brandywell football ground, Magee College campus, the Waterside area of the city, and of course countless views of the River Foyle. 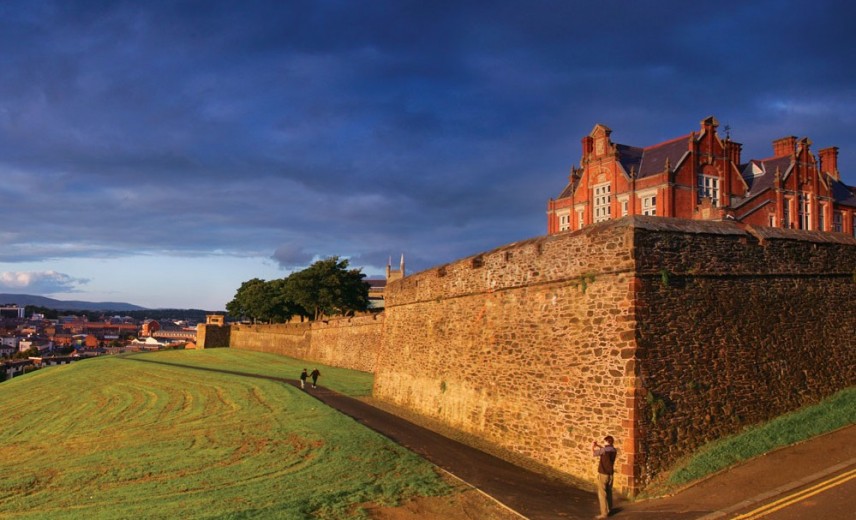