Scotch-Irish Migration to Charleston during the Colonial Period – Special Offer 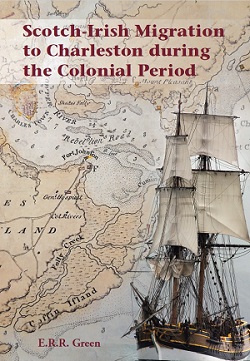 The year 1772 was hugely important in the context of the relationship between Ulster and America, and in particular South Carolina. In March 2022 the Foundation will be producing a never before published study by the distinguished historian Professor E.R.R. Green on Scotch-Irish Migration to Charleston during the Colonial Period.

This book focusses on the attraction of South Carolina for the Ulster emigrants, many of them of Scottish origin and provides an interesting look at migration from Ulster ports to Charleston and the Ulster-Scots settlement in South Carolina in the pre-revolutionary period

As a special offer to those of you who have already registered to take part in our upcoming workshop in Charleston, SC on Thursday 24 March, pre-order this book for just $10 and collect your copy on the day of the workshop!

This title will also be available to purchase on the day, but will be sold at the full retail price ($15).

To order, complete the form at the bottom of this page

This essay by Rodney Green on migration from Ulster to the Carolinas, particularly South Carolina, in the period leading to the War of Independence can well lay claim to being years ahead of its time.

It confirms that Presbyterian ministers continued to be involved in the organisation of congregational removals from Ulster. At the same time, Green’s research is also quite possibly among the earliest to contend that, by the mid-eighteenth century, the motive for emigration from Ulster to the New World being linked to a strong sense of religious persecution had by then been replaced by economic factors, mostly associated with agriculture and land holding in Ulster. Most important of all, perhaps, this intriguing case study identifies links between commercial trade, particularly the importing of flaxseed, with the migratory flow from Ulster ports that continued unabated until the outbreak of hostilities in 1776. By then well over 100,000 – some estimate as many as 200,000 – Ulster migrants, many of Ulster-Scots origin, had taken root in Colonial America, endowing it with many of the characteristics that would be evident in the emergence of a new nation … the United States of America

Rodney Green was born in Belfast and was educated at the Royal Belfast Academical Institution and Trinity College, Dublin, where he graduated in Modern History in 1942. After a year working for the Ministry of Agriculture, he took up a lectureship. In 1945 he was appointed staff tutor in the Department of Extra-Mural Studies at Queen's University, Belfast, though he left this post after two years to continue his research in America. In 1950 he went to St Antony's College, Oxford and subsequently to the University of Manchester, where he was Lecturer and then Senior Lecturer in History from 1954 to 1970. In 1970 he returned to Belfast as Honorary Professor and Director of the Institute of Irish Studies, Queen's University. His interests included archaeology, contemporary economics and Donegal Irish. He published a study of the industrial and commercial history of the Lagan Valley in 1949, and in 1963 a regional study of County Down for the Ministry of Finance. He was a member of the Royal Irish Academy, the historic Monuments and Historic Buildings Councils, the Cultural Relations Committee of the Department of Foreign Affairs in Ireland, and of the Radio Telefis Eireann Authority.