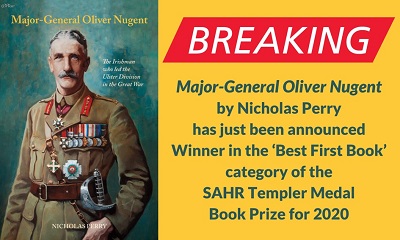 We are delighted to announce that Major-General Oliver Nugent: The Irishman who led the Ulster Division in the Great War by Nicholas Perry and published by Ulster Historical Foundation in August 2020 has just been announced Winner of the ‘Best First Book’ category of The Society for Army Historical Research Templer Medal Book Prize for 2020.

About the book – Major-General Oliver Nugent

This biography explores in considerable detail the life of Ireland’s longest-serving divisional commander of the Great War, who led the Ulster Division on the Western Front from 1915 to 1918. Alongside the challenges of divisional command Nugent had to manage the Ulster Division’s political dimension. The tensions that arose between him and politicians at home reveal not only the conflict between military and political priorities but also the divisions within Irish unionism during the Great War period.

More widely, Nugent’s career provides a unique insight into the political decline of the Irish landed class as well as their enduring military tradition. This study seeks to shed light on the different aspects of Nugent’s career by drawing not only on his extensive personal papers and diaries in the Public Record Office of Northern Ireland, but also on papers still in the family’s possession and the correspondence of key subordinates never previously used.

The book is beautifully produced in hardback with dust-jacket (reproducing the portrait of Nugent by artist William Conor). Running to 320 pages with 2 x 16pp plate sections (one section in black ink, the other in colour, including reproductions of the campaign maps drawn from the official and divisional history series). The book is finished with head and tail bands, and printed endpapers showing the officers of the 1st KRRC, India, 1895 (front); and officers of the 1st KRRC at the Malakand Pass, 1895 (back).

To read more about the book, the author (Nick Perry), and to order a copy please go to: www.booksireland.org.uk/store/all-departments/oliver-nugent

About the Templer Medal Book Prize

The Templer Medal was established by The Society for Army Historical Research in 1981 to commemorate the life and achievements of Field Marshal Sir Gerald Templer KG (1898–1979) and to mark his Presidency of the Society between 1965 and 1979.

The medal is awarded annually to the author of the book published during that year that has made the most significant contribution to the history of the British Army, as defined in the Templer competition rules. The presentation of the award takes place at the Society’s Annual General Meeting, usually in April of the year following publication.

For more information about SAHR and the Templer Medal book Prize go to: www.sahr.org.uk/templar-medal-book-prize.php?sid=bb10b510c434f8fdc1ddf2ee20286bd0

The Society for Army Historical Research is pleased to announce the results of the Templer Medal book competition for 2020. As a great many high quality entries were received from both established and new authors despite the many challenges facing everyone in 2020, the Society is pleased to recognise and reward, exceptionally in its centenary year, a winner and three runners up in both categories.

1st RUNNER UP  Blood, Metal and Dust: How Victory turned into Defeat in Afghanistan and Iraq by Brig Ben Barry (Osprey)

3rd RUNNER UP  The English Civil War: An Atlas and Concise History of the Wars of the Three Kingdoms 1639-51 by Col Nick Lipscombe (Osprey)