Alexander Robb and the Making of British Columbia:

The life and letters home of an Ulster Scots pioneer 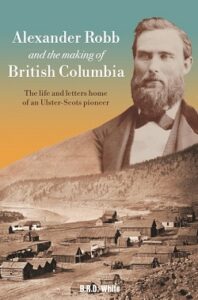 In 1862 Alexander Robb (1839-1910) was one of a group of young men from County Down, Ireland, who travelled to British Columbia.  They were among the thousands seeking to make their fortunes in the goldfields of the Cariboo.  Finding no gold and lucky not to starve, Alex got work among the labourers building the Cariboo wagon road.  After several years struggling to make a living, he and an Englishman were the first two Europeans to homestead in the Nicola Valley of central British Columbia.  Later, appointed by the province as superintendent, he oversaw building the first roads in the valley.

In a series of letters to those at home in County Down, Alex told of his experiences as a labourer, rancher and public servant in a young colony that was transitioning into a province of the new Canada.

Illness and death in his family took him back to Ireland where he steered the Robb farm successfully through a period of agricultural recession and major political change while continuing his commitment to public service.

Alexander Robb’s remarkable story of hardship and perseverance is told along with a full revision of his unique letters. The book also contains insights into the lives of his comrades from County Down and elsewhere who had sought their fortunes in the Cariboo.

The book will be published by Ulster Historical Foundation and will be produced in paperback with image plate sections, including maps of British Columbia and North Down, family trees and tables.

Brian R. D. White is a former Northern Ireland senior civil servant.  Born in Chilliwack, British Columbia, for most of his early life he lived in Ottawa, Ontario.  He is a graduate of the University of Cambridge where he read social anthropology and of Queen’s University, Belfast, where he was awarded a MA degree in Irish Studies.  The author is Alexander Robb’s great grandson.  In this book and in recent articles published in the Ulster Historical Foundation’s journal, Familia, the author has demonstrated his commitment to using family records in order to deepen the understanding of wider economic, social, and political issues.

Subscribers, Donors and Patrons will have their names printed in a special list in the book and be the first to have their copies despatched on the day of publication.

Note: local subscribers can collect their copies in person from the Foundation’s offices (observing public health and social distancing guidance).

Subscribers may be able to collect their copies at a launch event (details of any event will be issued in due course when it is clear that it is possible to go ahead).

The book is due to be published in Late autumn 2022.